If you had asked us a few years ago if we would have seen AJ Agazarm sparring in a friendly way with superstar Paulo Miyao, we would have said no way. AJ is used to being in controversy.

One of his biggest beefs is with Jake Shields. So that’s why watching this sparring match between AJ and Paulo is satisfying, because it shows both of them being so friendly and able to spar in a fun way.

It’s also great analyzing this Jiu-jitsu sparring video, because they both have such different styles. Paulo has a very flexible berimbolo game, while AJ is a strong using a lot of lapel grips from his back. He also has some great defense.

This friendly roll took place after they both competed at Polaris 18 in Newport. Unfortunately, they both ended up losing. Paulo lost to Ash Williams and Agazarm lost to Jed Hue.

During this friendly roll, we see AJ pull guard with some strong lapel grips. Paulo is able to pass, and gets his back. It’s here where we see this friendly roll really present itself as Paulo jokingly says, “not today, not today.” They both laugh.

Paulo is about to choke AJ, but AJ does a great job of defending and they says, “not today my friend, not today.” They both laugh.

Afterwards, we see AJ playing bottom and Paulo tries to make several pass attempts. AJ does a great job of not letting him pass, but eventually Paulo passes and gets into the side mount. It’s here where Paulo almost gets an armbar, but AJ scrambles out of it and now ends up on top, with Paulo playing on the bottom.

Paulo, ends up doing a berimbolo and ends up on top. The roll speeds up a little at this point but they end up restarting after a bit.

Paulo ends up getting AJ’s back and finally is able to tap him out. They slap hands and start again. Oss… on to the next.

In fact, AJ says “hey guys y’all are lucky to get to view this because honestly I don’t even know why polaris released it. This was a weight cut roll the day before our matches, and we were having fun. i was just happy paulo didn’t completely embarrass me on camera, because his game is no joke!”

Great sportsmanship on both of their parts. It’s a fun roll to watch as both are chill. 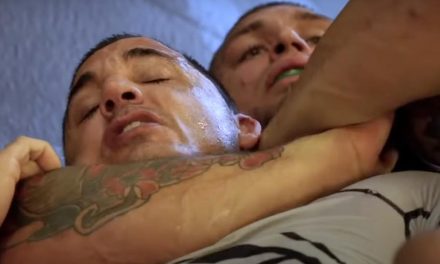